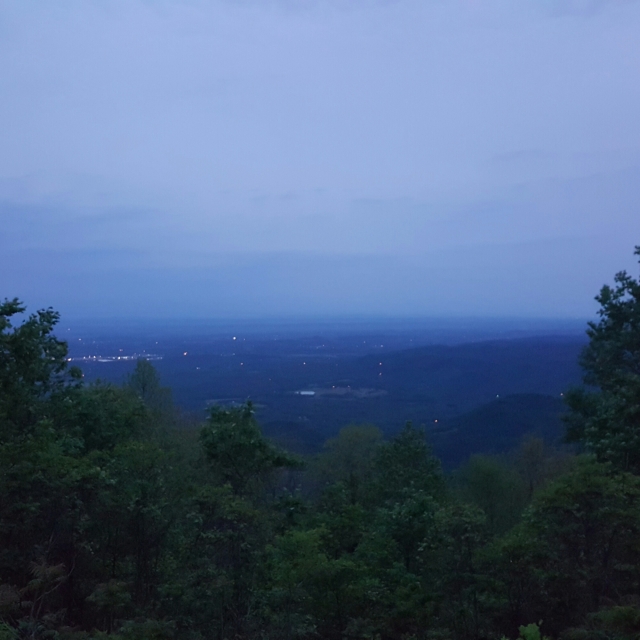 My Saturday morning alarm went off at 4am, but I had all of my gear laid out and was out the door in half an hour. I filled my hydration bladder and put some electrolytes and UCan in my body bottle. Using my UD vest was probably overkill, but I’m using it as much as possible to get used to it for my upcoming ultra events. Also, it was nice being able to just breeze past the aid stations without stopping for anything.
This was a point to point race, and I was planning on taking a shuttle to the start, so I arrived early go give myself plenty of time to pick up my packet and get situated. The first shuttle was supposed to leave at 5:20, but they were running behind, so I ended up doing a lot of waiting. Since I was by myself, I got to hear all of the people chattering around me, and it was interesting to hear their takes on the course and the changes between last year (the inaugural race) and this year.  It was cool, but not terribly uncomfortable, and I was grateful that the race would be starting with such mild temps, as it was sure to warm up pretty quickly.
We were scheduled for a 7 am start, but with the shuttles running a bit behind, we had to wait a little longer than anticipated. It wasn’t awful, and the race was organized really well overall. The logistics of a point to point race seem like they would be pretty tricky, and I was impressed with the way the race went off. The start was at the top of Fort Mountain. It’s only about 9 miles to the bottom, so we actually ran about a mile and a half or so, turned around, ran back to the start and basically started over. The first 5 miles was up and down, and the race directors had signs out periodically that said things like, “we didn’t say it would be ALL downhill” etc. There was a lot of ping-ponging going on the first few miles due to the ups and downs and the different ways people handle elevation changes. I just kept telling myself to stay comfortable and not blow myself up on the uphills. We hit mile five and it all started to go downhill…not in a negative way, just literally downhill. They had a sign on the course that it was time to GO and to expect an increase in pace between :40-1:30/mile! So I went…but conservatively. To be honest, I didn’t know what running downhill for seven miles would do to my legs and how I would feel. I knew I wanted to PR, and I didn’t want to blow myself up and regret it later in the race.
Because of the turn around points early in the race, I got to see the women who were ahead of me. I was about tenth or so, but there was a group of four women just ahead of me, so I tried to keep them in sight. I went back and forth with a few of the women, and ended up passing three of them for good, but I started to experience a sensation in my left hamstring that I can only describe as being right on the verge of a Charley horse. I tried to just keep drinking, fueling, and maintaining a short
stride, and was able to keep the feeling in check.
We hit mile 11.5 and started going back uphill. I was grateful for the change initially, but my lungs soon decided that the downhills were preferable! I kept waiting for one of the women I had passed to come up on me in that last 1.6 miles, but fortunately that didn’t happen. I saw my awesome family right before I turned the corner for the finish line, and that gave me such a boost! I ended up running a time of 1:41:40, which was good for 2nd in my age group! There was 2430 feet of elevation loss and 430 feet of gain, so if I hadn’t gotten a PR, I would have been embarrassed. I had a great time, and the conditions couldn’t have been better. Great weather, easy venue to navigate from a logistical standpoint (parking, bathrooms, etc), and everyone was very helpful/friendly. I would definitely do this event in the future!